or THE ZÜRICH FLOHMARKT

I love flea-markets. Well…I should probably admit to myself that what I actually like is a more… romanticised version of flea-markets: the kind that sells amazing, pretty things that don’t even remotely resemble junk, at incredibly low prices. It’s this kind of place I often dream about at night – and when I do, I always end up getting more things that I can carry and I have to leave some behind, which makes me sad. But I digress. 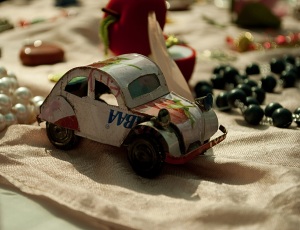 After getting off the train and meeting with Sebastián, a newly acquired friend from Argentina and fellow photographer, we made our way to Helvetiaplatz, the place of a weekly Flohmarkt, apparently the biggest in Zürich. I don’t know why, but I was somehow expecting a very large outdoor store with shiny things neatly arranged on shelves. It wasn’t like that. 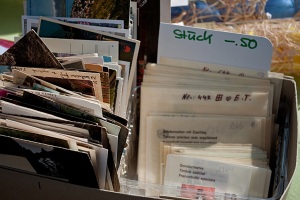 It was chaotic, random, a bit kitschy and with so many chainsaws waiting to be sold that it made you think twice about how peaceful the Swiss really are. And to top it off, given the numbers of Italians that I could hear all around me, it felt just like being in Italy. Obviously, they were the only ones loudly advertising their products: “Eee, signorina, nur-ah zwanzig-ah Fraaanken!“

It’s difficult to describe the place,which is why I’m grateful for the numerous visual evidence – but what I am going to do is compare it with the flea-market in my home town. You see, here I actually had more fun taking pictures of everything than looking for things to buy, which is absolutely not the way you do it in Romania.

First of all, no person in their right mind would bring a camera to a Romanian flea-market, unless they are looking for an exciting way to commit suicide. Secondly, you must keep in mind at all times that you are not there for a leisure stroll – you have to be quick. Hastily search through a pile, find nothing, move on, no eye contact and most importantly no emotions – you do not want to show how excited you are about that pair of pants because that makes you vulnerable to being ripped off.

For instance, when I’d go thrifting with one of my best friends we’d have this code: if something was really nice and worth buying, we’d shrug our shoulders and just give a short “hm” which sounded like “Yeah, it’s fine if you don’t have anything better to spend your money on”. In reality that actually meant “Holy shit that is amazing buy it buy it buy it!”.

And lastly, if you want to haggle about the price of an item, you would have to be good. Really good. Negotiating there is not for the faint of heart.

In Switzerland, though, things are different; easier, one might say. After seeing a pen than I really liked and asking the vendor how much it cost, I was already making strategies to help me get a lower price. It only took the moment between hearing the price and taking one more look at the object to see if it’s really worth it, to make the man hurriedly throw a better offer on the table. Yes, it was that easy.

But in general everyone seemed laid back, and there to have a good time. They left us alone, slightly amused by those lunatics going around photographing everything, except for two ladies (or maybe it was the same one who felt the need to make herself clear) who admonished me for not asking before taking a picture. And then stating that I have to have permission from the organizer of the market in order to do that. Which was bullshit, obviously. She was probably Italian. 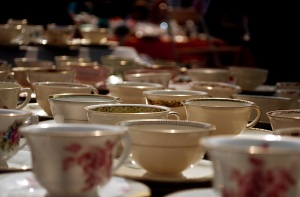 All in all, I saw the most adorable things – pretty tea cups, old photographs, postcards written in every language possible, hundred-years-old newspapers, pretty boxes, pretty bottles, pretty frames, old cameras – and had an amazing time! I uploaded more photos, including some of cute bikes, my newest obsession,  on Flickr, so go take it look at them!

And if you are wondering if I bought anything, aber natürlich!

Because tea and tea-related items are awesome. 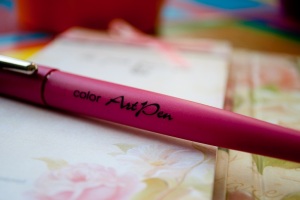 Not because it is pink.

5 thoughts on “A comparative study of a Swiss flea-market”